One of my favourite cycling route is to cycle from Semenyih Sentral (bus station) to LEKAS (Lebuhraya Kajang-Seremban) Highway until the Mantin exit. From there we will exit the highway and cycle over Bukit Puyoh and head on to Lenggeng, Broga and back to Semenyih Sentral. A distance of 55km.

Since 13 Feb 2010 (but only officially opened since 1st March 2010), the Setul and Ampangan Interchange of LEKAS was open for traffic. Therefore now the entire stretch of the 44.3km Kajang-Seremban Highway (Lekas) was open to traffic. Now we can increase the cycling distance.

Dr Ahmad Taufik Jamil invited a few of us to ride the new stretch of LEKAS Highway on Sunday 7th March 2010. So four of us (myself, A Taufik Jamil, Tzyya Won and Mohd Farris Mat Nawi) turned up at 7.30 am at Petronas Prima Saujana. We planned to ride from Saujana Prima to Ampangan, turn back to Mantin exit, cycle over Bukit Puyoh and head on to Lenggeng, Broga and back to Saujana Prima. A distance of 105km.

We started at 7.38 am from Saujana Prima. Starting from Saujana Prima is a bit tough for me since there were 5 climbs before reaching the LEKAS Kajang Selatan toll booth. Being an obese person, I was left far behind. Once we start cycling on LEKAS highway, the going gets easier since it was relatively flat until Mantin exit. 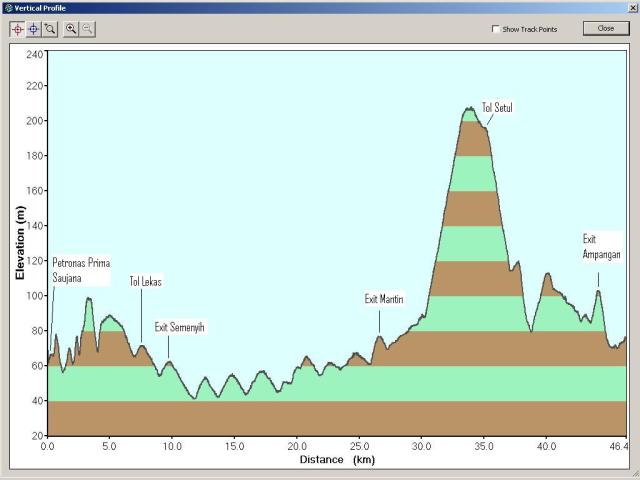 Vertical profile of the route until Ampangan exit.

After that the going gets tough since there was a vertical ascent of 140m in 7km distance. Farris kept me company for most of the climb to the top. It was a tough climb but do-able. I didn’t push to the max since I know that I have a long way to go. My heart rate during the climb was only around 160 bpm.

After the tough climb, it was an amazing downhill ride. Despite pressing on the brakes, I was hitting 55 km/hr. You don’t want to make any mistake at this speed on a road bike, otherwise you’ll be kissing the asphalt and end up with an amazing road rash instead. The only “speed bump” was the Setul toll booth, halfway down the hill. We had to slow down to navigate the narrow cyclist lane at the toll booth.

We had two choices, to exit at Sikamat or Ampangan. We chosed to exit at Ampangan since we were hoping to find a food stall. It was already 10 am and we were hungry after cycling 46km. The Ampangan exit brought us to Kuala Klawang road, which led to Jelebu via the Bukit Tangga road. We turned to Panchor Jaya and had roti canai at Teratak Restu Ibunda foodstall. 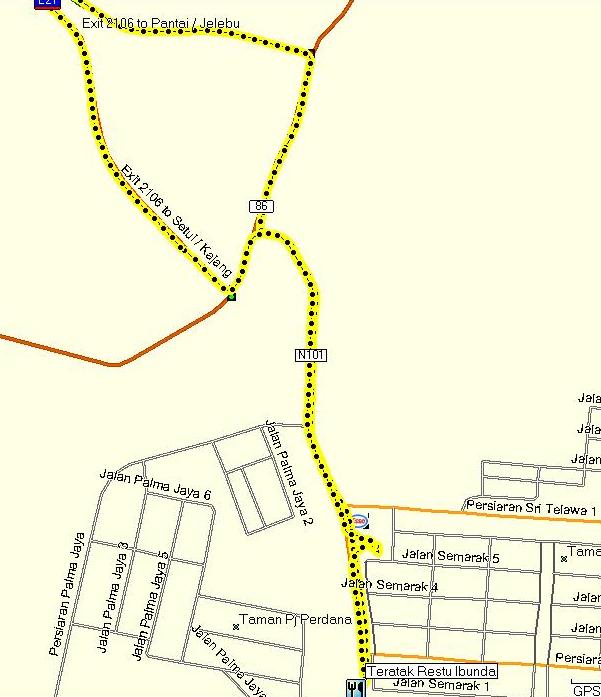 Due to the hot weather, riding on the LEKAS highway under the hot afternoon sun was not an option anymore. We already ran out of water so we got off the highway at the Mantin exit and headed towards the nearest 7-11 in Mantin town. After refilling our water bottles, we rode on towards Beranang. To escape the hot afternoon sun, we took a detour into Kg Jalan 6 Kaki and came out at Jalan Bangi Lama. We headed towards Semenyih and reentered LEKAS highway via the Semenyih interchange. We rested at the R&R at LEKAS Semenyih toll before tackling the final hill climbs before Prima Saujana.

By the time we reached Prima Saujana, it was already late. We ended up cycling 103 km in 04:52:53 hours with an average speed of 21.10 km/h from Saujana Prima to Ampangan and back via LEKAS .

To Dr A Taufik Jamil, Tzyya Won and Faris, thank you guys for your patience 🙂

After suffering under the hot sun, instead of using this route, I would like to suggest another option.

Instead of cycling to & fro on the same route, it would be nicer to cycle in a loop.  It would be better to ride on the highway in the morning when it is cool and turn back using the old trunk road since it would be shaded and easier to find stalls for food and to stock up on drinks.

One route suggestion which has already been tried out by Pak Wan and the Gedebe group is to start from Semenyih Sentral, get on the LEKAS highway and ride to Ampangan. Then take the Kuala Klawang road towards Pantai and Pajam. Can have a meal break at Pantai. At Pajam turn left, go over Bukit Mandom to reach Lenggeng. Another meal break here. Then a leisurely ride to Broga and back to Semenyih Sentral. Only 90km. 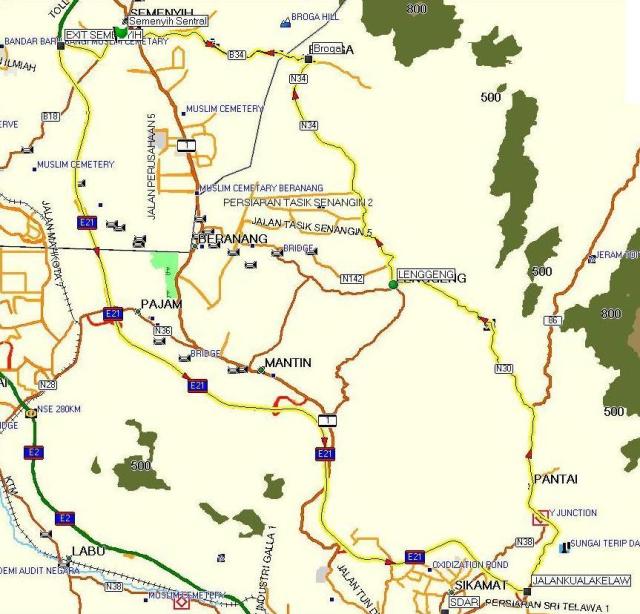 This entry was posted in Cycling & Medicine. Bookmark the permalink.

1 Response to Cycling on LEKAS Highway – South Kajang to Ampangan